When I was in San Diego preparing for Artwalk I frequented a thrift store called Pat's Corner in the North Park area. I struck junk gold there. A lot of the pieces I made for the festival used stuff found at Pat's.
The place was a maze, part of it was organized and somewhat presentable and other parts looked like modern history upchucked and no one bothered to clean it up. The yard out back had the larger bits of broken antiquity that had been pulled gracelessly off the sides of houses & somehow ended up in Pat's corral.
Overseeing it all, Pat sat in the middle of the store like a glorious queen of tarnished dents. The several times I was there, I never saw her out of her throne.
Her throne.
A humble chair slightly raised and surrounded by a world of junk unimaginable. I would not be at all surprised to find Jimmy Hoffa's dentures under an old Mad Magazine on the floor next to a cookie tin full of forks. From atop this post she'd size up your finds and, with the arbitrary mathematics of thrift store pricing, would arrive at a dollar amount you could never argue with. This price wasn't made up, it was pronounced with sage-like certainty and was usually rounded off to a fiver.

My last time in there I talked to her for a bit. She seemed to approve of the artistic madmanship I planned for the items I bought. She would only let me take a picture of her hands which I admire. They do better job at describing the place than my feeble words ever could. 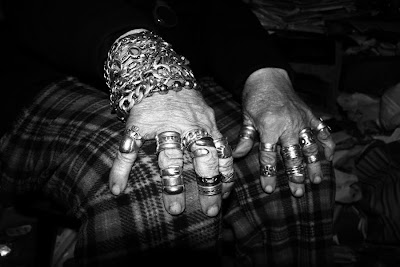 Tweet
Posted by Kreddible Trout at 1:10 AM No comments:

Despite the redundancy of this announcement I still feel I must announce this new news:
the blog has had a face-lift!

Check out the sleek new designs! Scroll down, the blogs been on the treadmill and drinking smoothies!
Ergonomic features include:
- a wider blog format!
- eye friendly sleekness!
- colours similar but slightly different from the old ones!
- and a BRAND NEW BANNER at the top of the page!

SOMEONE'S getting a raise! Not me. But... well, someone at 'blogger' maybe. I might get myself a goldfish for the office...

Soon to follow will be new stuff over on The Mothership Kreddible Trout Connection! Don't go there now. Wait until tomorrow. Seriously, if I see all sorts of hits on the website before I make the new additions the goldfish gets it!