Dusty blogs, the big move and some old scottish guy

WHERE THE HELL IS THE MAID?

So... I left this place in a bit of a rush a few months back. Needed to pack up my life in Victoria, BC & move to Toronto, ON via Halifax, NS... yeah, that's how I do things. I'm complicated.

Nutshell: first and foremost, above all this picture taking business, I am an actor. Every now and then I fall out of it. Partially from circumstance, partially from a severe allergy to the 'business' side of it. I seem to break into furious, sweaty, trembling sneezing fits & emit a smell not entirely unlike tapioca when confronted with schmoozing or schmoozers. Sadly, many in 'the business' act as though this aspect is more important than actually being on stage (or in front of a camera). This is what I'm allergic to.

So, a few years back I fell out of it.When I tried to get back in I found the town I was in didn't have enough work to support the actors already established there and, as I had landed there not acting, I had to start from ground zero. I've re-booted my acting career several times in my almost 20 years at it and I really didn't want to build from the bottom again in a city with a very low ceiling. So... as much as I have resisted it these many years, I decided to move to the big shitty (Toronto) and make it happen here. I have many peers from over the years here which means more feet in more doors. There is a lot of work ahead and this huge move, which has uprooted not just me but my loving, supportive wife, will draw me away from photography for a while. Not altogether, because I feel almost as strongly for it as I do acting (and dislike the 'business' side of it as much) but this move must take the majority of my focus.
Which it has since my last post.
Spent the spring/summer in Halifax reprising one of my favorite roles, The Sheriff of Nottingham in Shakespeare by the Sea's The Adventures of Robin Hood. This was a re-mount, re-vamped production of our 2005 creation and was phenomenal.
I just landed in Toronto where my wife and I are settling in & I've landed the next role that will ensure I spend very little time with my camera or computer: MacBeth in Hart House Theatre's November production of Beverly Hills Cop II... oh, sorry, I mean, MacBeth.

So... we're still around... we still have pretty pictures to look at on the Mothership Kreddible Trout Connection. Once things settle I do plan to bust out a tonne of new 'Uniquely Mounted' pieces and will be looking to do some large scale photo installations here in Toronto. I'm doing headshots fairly frequently & hope that all these things will be able to partially sustain me between acting gigs. That's the plan. 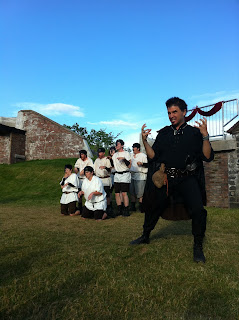 Posted by Kreddible Trout at 7:58 PM