Arts, Crafts and the Cycle of Life

(I wrote this piece a few years ago to post on JPGmag. A conversation I had last week reminded me of it so I decided to share it here. These are the kind of blog entries that I enjoy sharing. I hope you get a kick out of it.)


Arts, Crafts and the Cycle of Life 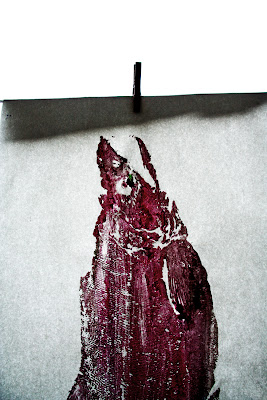 I went to the Salmon Run the other day and have to admit I was a little disappointed to see not one single salmon do anything but swim or just lay there being eaten by birds. There was no running involved. I thought I was going to see salmon doin The Darwin.

Seems every year for as long as there've been salmon, they've been swimming upstream, spawning and dying. To the population of Victoria BC and some late-season tourists it's apparently quite a site to witness. The vibrant struggle of salmon fighting fierce opposing currents & predators has got to be one of the more impassioned displays of survival of the species nature has to offer. Really something to be seen. Unfortunately we had arrived at the tail end of the season and were left with a river teeming with dead salmon carcasses and scavanger birds. Lots of interesting photo ops but the majesty of nature had been replaced by nature's version of dumpster diving behind McDonald's.

The area, Goldstream Provincial Park has nature trails along the stream with information posts as you'd expect. 'The Life Cycle of Moss'... 'Dew: Nature's Perspiration'... things like that. We walked along the paths which wound creekside through the woods and soon came upon a little visitor's centre. An information lodge stuffed with stuffed birds to look at, t-shirts to buy & people with beards to explain it all to the city folks. After pushing a few buttons to hear stuffed birds making sounds that the live ones were making outside I wandered out the back where I discovered something quite disturbing indeed. It seems a macabre tradition to allow (and even encourage) children to cover dead salmons in paint and make prints on large sheets of white paper with them. Really, tables full of dead fish and paint lined the outside wall of the information centre. It looked like kindergarten of the disturbed. I was confused. I'm not a parent but I do seem to recall that when I was a child the grown ups telling me not to play with dead animals. Even if I really really wanted to. I asked someone if they do the same thing with squirrels to which the response was mild disgust. A dead fish is ok though...

A fitting homage to the majesty of nature, don't you think? These solemn creatures fight all odds to procreate, battling current, predator and time, and end up being groped by a five year old covered in paint. I heard one kid remark "This is SUCH a good idea!"

I've decided that this is how I want to be remembered. Burial is so passe, cremation is kinda cool but who's ashes are they really? George Carlin once said he wanted to be stuffed full of dynamite and blown up. I was favouring that idea until now. Thanks to the salmon run I have a new idea. When I die I want people to make artsy-craftsy prints of me! At my service, I want to be lain naked on a table so everyone can cover me in paint, slap a big sheet of paper on me and make themselves a print. I can be wiped down and redone until everybody has their own, artistic interpretive print of me to do whatever they want with. Hang me over your mantle. In your office to inspire productivity. You name it!

A fitting tribute to the cycle of life and not in the least degrading. 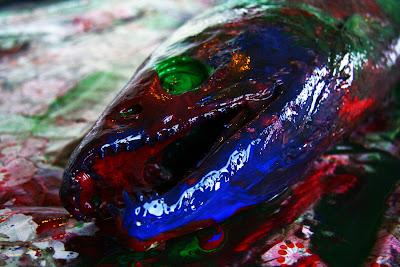