Needless to say I'm pretty thrilled about it. Mr Suzuki himself signed it. Pretty cool. 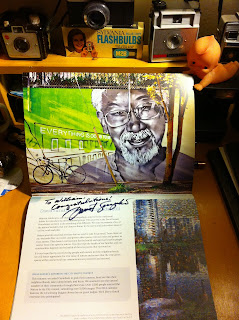 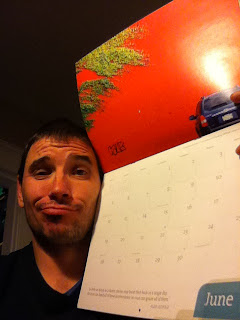 I'm pretty thrilled to be in the calendar and hope that some of you out there go over to the David Suzuki Foundation website and buy one. I'm pretty certain it's going to a good cause.

#2
On that very same day (wow it was like x-mas in my mailbox!) I also received a bunch of stickers I ordered from redbubble. A few of my own designs and some others I really like. Here they are displayed around the calendar: 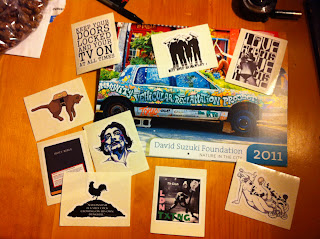 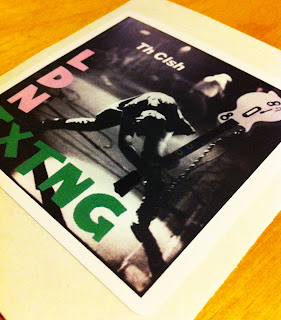 #3
I was also asked by the good people at Toast Cafe in Sidney BC to fill their walls with art! I frequent the shop in my 'day job' as a landscaper to get the best coffee on the peninsula. (for those of you who don't know what 'the peninsula' is, it refers to the greater Saanich area of Vancouver Island. Here you go!) They asked me Monday & I had stuff hung by Saturday. If you're in the Sidney area & want a great coffee & a dang good sandwich you should stop in. (I hear they have some nice art on the walls too!)


#4
And finally... I sold a print to some folks from Winnipeg. Someone contacted me after having seen my uniquely mounted 'brownie as monolith' hanging in Demi-Tasse (Formerly Rising Star) Cafe on Broad Street in Victoria & asked if they could buy a print of it. It's to be a gift. There's a cute little story behind it that I'm excited to blog about when it's opened at x-mas.

And I think that about does it for the life and times of Kreddible Trout for the beginning of December. Good things. Not terribly lucrative things, but good things. I like good things.


...and remember our x-mas slogan kids:


Nothin says 'Happy Holidays' like
a nice piece of Trout!