The Hostile Takover of Art (pt.1)

Happy Buy Nothing Day Everyone!
This has been brewing in me for some time now, the fact that art is almost surely dead. If not 'dead' it's been buried alive and there are few of us left who seem to care & we can't find any shovels. Buried, bought and buggered by business. What better day than Buy Nothing Day to expel this little demon, eh?
That's right kids, sit back and get ready for a rant!
(this is how we do business here at KTP!)
Many things over the past few decades have exemplified business & marketing's hostile takeover of art but I think we can all agree that their true September Campaign was when a certain shoe company bought a song called 'Revolution' that should never have been able to be sold by someone who had nothing to do with it's creation in the first place. In 1987 Nike bought the Beatles' song Revolution from Michael Jackson and put it in a commercial to sell shoes made by child sweatshop labourers.


Now, I know there had been many hugely successful marketing campaigns before that (I mean, Max Headroom selling Pepsi was just brilliant!) but this was really the first, blatant, open handed slap in art's face. Marketing stood there with that smug little smirk on it's face, 'What're y'gonna do cry about it?'
This was marketers' big risk... this was the test. As tests go it was a pretty safe bet on their part. For years they'd been preening us for the moment when they'd ram that final nail in the hippies' coffin (the previous ones nailed by the hippies themselves in the form of Pathfinders and the starting of marketing firms) & get on with business.
The test was this: if we can take a song, a piece of art, written by a group of artists who are revered to the point of sainthood, a song that was clearly pondering revolution and now has the hindsight of it's lyricist's rebellious path since it's release, a song that emulates the population's (albeit distant and homogenized) understanding of 'revolution' and use it to sell them sneakers... we've got them in the palm of our hands.

And they did.
And they do.
They needed to see just how far they could push before we'd actually rebel.  They're still pushing. Because we let them. Because alongside art, they bought our morals and integrity as well.

Seems really sinister doesn't it? It's not. It's just business. 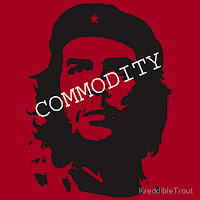 Since then we've seen Fred Estaire dancing for soda pop and revolutionary figures being reduced to t-shirts who's wearers have only
ever rebelled by going to the Rage Against The Machine concert against their parent's will. (actual quote I overheard 10 years ago: "Man, I love Rage, I just wish they weren't so political!")


It has become so ingrained in our ideals that anyone who questions the tried and true methods of business is written off as 'an idealist'. Those who question the pervasiveness of marketing get heavily patronized in that oh so charming way business people love to. It's simply a fact. It's reality. If you dont' play along you're simply missing the point. Anything but the pursuit of money is considered a charming little idea that is nice to visit in the movies but has no viable place in 'the real world'.

The idea of creating art, simply for it's own sake, for all the reasons artists have ever created, for it's true purpose: to vent, to nourish, to beautify, to rebel, to stave off 'demons', to invite & rejoice in epiphany, to mirror-hold, to provoke change, to sway lovers, to criticize, to entertain, TO EVOKE... all these things really only hold merit if you've got a good way to sell it. If you follow the rules on how to 'get it out there'. If you don't, if you're not interested in 'the business' side of it, you're patronized.

I've not been in business long (or arguably at all) though people have been buying my art for a few years now. I simply do not have the knack for it. I've tried. I've done research, taken courses, but everything about it just pets me the wrong way. The goal is wrong. The goal is money. I never want to sell someone a piece of my art. I want people to want to buy it. If they don't want to, I'm fine with that. The error in my business thinking (a source of pride for me) is that I don't ever want to cater my art to someone else. I'm not a service, I'm an artist. I don't want to keep abreast of the latest market trends because that's what I'm supposed to do to be a successful businessman. I want to create my art. Period. I would rather work odd jobs the rest of my life & have folks who truly appreciate my art occasionally buy it than do what I allegedly need to in order to 'be successful' in the eyes of money.

I'm such a REBEL!

In my peripheral experience in 'the photography business' I've noted one thing, this industry has admittedly and shamelessly become almost entirely about marketing. A little over a year ago I attended an intensive, five day, photography workshop. I rarely mention it and don't really put it down on my resume as the only thing I truly took away from it was that I'd rather remain an artist than become a business person. Of the... we'll say there were 250 people there, I saw maybe... MAYBE 20 people who I thought might be artists. The rest were, at best, business people with expensive cameras. At worst, marketers with even more expensive cameras. From the instructors to the students it was all about how to 'get yourself out there' and 'be seen' while the thought of art took a back seat or was left entirely out of the equasion. The question of whether or not the person's product provoked any real need to 'be seen' was never posed. My understanding of the mantra is this: you can create stunningly uninspired shit all you like, you just need to know how to 'get it out there' and you can be 'successful'. People are jumping through hoops & knocking over old ladies in order to get to the front of this shameful line. For whatever brief minute they'll be there before someone else comes along with a bigger shinier hat and a brighter, better crafted smile. The idea I heard repeatedly was that, despite the 'economic downturn' we were (are) in, some people were making a killing! More successful then they've ever been! How? Please tell us HOW? By 'marketing like they've never marketed before' was the answer. Many of them claimed that 75% of their time was spent marketing. That's 75% of their time not taking pictures. My heart ached.
The presentation that opened the entire seminar had some pointy-haired guy (who was braving this recession splendidly) go on at great lengths about how he's started wearing mismatched socks because he thinks it makes him more unique... because he saw someone else doing it. In my world, that makes you desperate, not cool. He doesn't do it because he is more unique, but because he thinks it'll make him so. So... he's a poser. His wedding photos were good, don't get me wrong, he obviously knew what he was doing with a camera & photo editing software but what made him truly successful was his marketing.

And his socks. Let's not forget his clever socks.

(... I stopped wearing mis-matched socks a few years ago.)

I could go on about this all night, but there's a reason I called this 'part 1'... I have a lot to say on the issue.


In closing, there is still a faint knowledge that we're not only allowing this to happen to our good friend art, that we've accepted it and have almost entirely lost the ability to recognize that there is anything wrong with art's direction is being diverted by greed. The knowledge is faint, but it is there. Isn't it?

All that said, you must think I'm a miserable no-fun-nick. Far from it. As you can probably figure out from my marketing campaigns of the past year, I have a great deal of fun not taking any of this seriously at all.
(Besides, most of you know me anyway as really, I've done a horrible job with my social network marketing strategies and have done little to get this blog 'out there' beyond ... hi mom... beyond a smallish circle of people whom I know personally... there's a marketing term for that that illudes me at the moment)

Again, Happy Buy Nothing Day Everyone!!!
(If anyone buys something from me today... I'll be SO MAD at you!)
-Kreddible Trout